Once you've seen it, you'll never forget it.

Edsel, “Once you've seen it, you'll never forget it. Once you've owned it, you'll never want to change." Edsel had its origins nearly 10 years before its release. As early as 1948, the Ford Motor Company was researching the production of a medium priced car. Ford’s goal was to retain Ford customers by offering them the option of trading-up incrementally from the Ford line all the way up to the Lincoln line.

In April of 1955, Ford established a “Special Products Division” with the objective of creating a new line of cars that would address the gaps between both the Ford and Mercury line, and the Mercury and Lincoln line. The car was known then only as the “E-car,” for experimental. 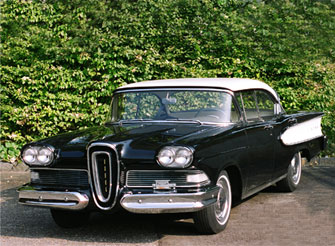 The “E-car” project was unique in many respects. The aim was to design a car that was recognizable from any angle.

The “E-car” had sweeping lines and a “horse collar” grille that certainly made it distinguishable from many cars of its era, but its unique appearance was not limited to the body design. An aircraft inspired instrument panel was loaded with new options like visual warning lights, a “Dial-Temp Air System, and a floating “Speed Warning Light Speedometer.”

The “E-car” would also be given special consideration. Two new V-8 engines, the E-475 and the E-400, were designed for the “E-car” project. The “Teletouch” drive, a set of transmission buttons located in the center of the steering wheel, allowed the driver to select shift, reverse, and park “without lifting a hand from the wheel.”

Every aspect of the “E-car” project was given extraordinary attention, right down to the selection of the name. Wanting to capture the excitement surrounding the new product line, Ford struggled to find a name that would fit the spirit of the project.

The Ford Motor Company ultimately choose the name Edsel, in honor of Henry Ford’s only son, and in 1956 the “Special Products Division” was renamed the Edsel Division.

With a name in place and a design like no other, Ford set out to entice the public and create interest in the new Edsel line. An unprecedented promotional campaign included ads that created an air of expectation like never before for a new car.

The publicity worked, creating much public speculation and excitement. With great fanfare, the Edsel made its public debut on September 4, 1957. 2.5 Million Americans made their way into showrooms on what was dubbed “E-Day”.

Along with their unique styling, engines, and Teletouch shifters, the Edsels were filled with innovations and options that, common for today’s vehicles, were ahead of their time. Innovations for the new line included a transmission that locked in “Park” until the ignition key is turned, a “control-center” 60/40 split front seat that allowed for driver comfort and easy entry to the rear seat in 2 door models, and hood and trunk releases that were accessed from the driver’s seat.

Initially, the promotion appeared to be a success, as it certainly created public interest in the car. However, it soon became apparent that, despite the crowded showrooms, few Edsels were being sold. Ford continued to aggressively promote their new line, but by the end of the year, one in which Ford expected to sell over 200,000 Edsels, they were faced with the disappointment of not even meeting one third of their projected sales.

Perhaps the overly ambitious lineup of 4 distinct models built on two separate platforms was too much for the general public to consider. The radical, for its time, styling may have also contributed to the poor sales records. Shortly after its debut, rumors of poor quality plagued the Edsel line. Since the Edsel was built between Fords and Mercurys on the assembly line, assemblers, working outside of their regular routine, would occasionally forget to install some parts or would have to contend with parts that didn’t always fit properly. In addition to the confusion on the assembly line, Ford was also having problems supplying parts for Edsel production. As a result, many early Edsels were shipped to dealerships with parts missing.

It may have been a combination of these factors that led to poor sales, but one thing was certain, the car buying public was less than enthused. In an effort to help their new line, Ford decided to make some changes. In January of 1958, Mercury, Edsel, and Lincoln were consolidated into one division (MEL).

For 1959, Edsel trimmed their product offerings to the Ranger, Corsair and Villager models, dropping the market between Mercury and Lincoln. The “Teletouch” transmission was removed from the line & as part of the 1959 model year cost reductions, Edsel offered the Ford division's 292 Y-block in the Ranger, and 332 cubic inch in the Corsair. New for this model year was the option of the 223 cubic inch inline six cylinder. Sales continued to slide in 1959.

1960 was to be the final year in the colorful history of the Edsel line, offering only the Ranger passenger car and the Villager station wagon. Based on the Ford chassis, the Edsel Ranger had unique side moldings, grille ornamentation and vertical tail lamp housings. A few options available for prospective Edsel owners included four-way power seats, back-up lamps, padded dash, "Polar-Air" air conditioning, and two-tone paint. Engine choices included the 292 cubic inch V8 and the 223 cubic inch inline six cylinder.

Sadly, just over a month after it's October 1960 introduction date, it was announced that the Edsel line would be discontinued. The production figure for 1960 was a mere 2,846 units, bringing the total 3 year run of one of America's most unique cars to 110,847.

Speculation over what caused the Edsel to fail continues to this day. Perhaps it was the styling, the confusion of filling two product line gaps with the same line, or maybe the name itself. Maybe, the Edsel line just couldn’t sustain the impossibility of living up to the hype created around its release. What is certain is that the Edsel remains one of the Ford Motor Company's and automotive history's biggest curiosities. Edsel has entered the American lexicon, a name synonymous with failure, but despite its short-lived production, it continues to live up to the claim, “Never before a car like it.”

Chief Designer of the Edsel, Roy A. Brown, Jr, had previously supervised the design work for the 1955 Lincoln "Futura" concept car. The car never saw production, but the one-off Futura, with some modifications from car customizer George Barris, would be resurrected as the "Batmobile" for the 1966 television series "Batman."

In July of 1957, a 2-page advertisement in Life magazine announced, “The Edsel is on its way.” The wrapped car was shown at a distance in an attempt to create public interest.

On October 13, 1957: The Edsel Show, a one-hour special, aired on CBS. Hosted by Frank Sinatra, the show included such stars as Bing Crosby, Louis Armstrong and Rosemary Clooney. The favorable ratings for the show did not translate into sales for Edsel.