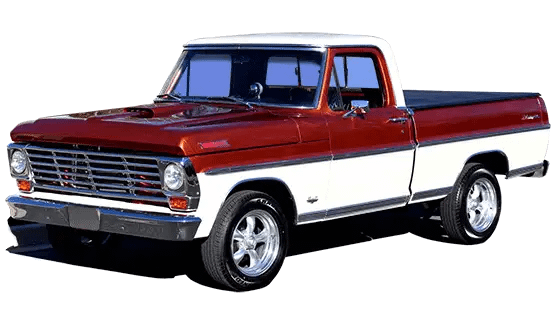 1967 was the year of the introduction of the fifth-generation F-Series. Truck buyers were introduced to a longer cab (3 inches longer) and heavier frame, new interior cab fittings, exterior trim, grille and engine selection. Trim levels were Ranger, with carpeting, luxurious plush seats and chrome trim, the Custom Cab, and the Base. The F-Series pickup truck was built on the same platform as the 1965.

In 1968 the hood emblems on the F-Series incorporated reflectors and reflectors were added to the rear of the truck bed. New safety standards meant new interiors and factory-installed air conditioning was an added feature. The 360 and the 390 FE-Series engines were now available. The 352 engine was replaced with a 360 ci V8, and a 390 V8 was available.

By 1969 the new 302 Windsor V8 engine would be available. The suspension components from all 1969 F-Series are completely interchangeable. This was the year the 4-door pickup truck with Crew Cab was available. Also available in for the 1969 Ford F-Series pickup was a Contractors Special package, complete with side boxes on either side of the bed and an optional 110v generator under the hood.

In 1971 AM/FM radios were now available as an option. Also new for this year was the newly designed grille insert, steering wheel design and new colors.

1972 was the final North American production year for the F-Series. The upper level trims included the option of new power breaks. A new single rear wheel pickup, the F-350 SRW was introduced. The wheelbase was longer, but the length was the same as the F-350 or F-100 pickup truck. A Camper Special package was available for the F-350 SRW.

The sixth generation of F-Series premiered in 1973. Still using the 1965 revised platform, it had new front disc brakes, bigger cabin, and the gas tank positioned outside of the cab and under the bed. The air conditioning and heating was markedly better, and it had full double wall bed construction. This was when the SuperCab was introduced.

The Ford F-350 SRW (single rear wheel) pickup was introduced in 1973. It had a longer wheel base chassis and was the same length as the Ford F-250 pickup.

1974 was the year of the extended cab for the F-Series. This was called the SuperCab, with 6-passenger seating and a marginally shorter body. There was the option of either a bench seat or a pair of jump seats in the rear. It was in 1978 that the SuperCabs would get the option of part-time 4-wheel drive with a gear driven NP205, or a full-time 4-wheel drive with chain-driven NP203 transfer case.

In 1976 the FE engine series was dropped, and in its place were the 351 series and 400 series engines. The F-Series was officially known as the best-selling truck in the United States. This year the truck saw new black accents around the headlights, but few other changes.

1978 saw the introduction of new square headlights on higher trim packages, and finally became standard in 1979. Round headlights were still available for custom trim levels. Instead of the split grille design, there was now a single grille insert. The headlights were now moved beside the grille and the park and turn signal lights were below the headlights. The F O R D letters were now on the hood above the grille. The Lariat trim, which was a luxury trim level, was introduced in 1978. Other trim levels were the Ranger, Ranger XLT and Ranger Lariat, which included rectangular headlights with optional chrome headlight bezels, and a chrome grille insert. The new standard base engine was the 300 ci inline six with 114 horsepower.

1978 was also the year the Ford Bronco was redesigned to be an F-Series pickup. It had a removable camper shell and was a luxurious SUV competing against the Chevrolet Blazer at the time. Most of the parts for the Ford Bronco were interchangeable with the F-Series trucks, and it was offered with a 351M or 400 VU engine. The Ranger Lariat was also introduced this year.